The Magic of Minerals

Throughout history, minerals have played a critical role in the development of living things. Without them, life could not exist. Volcanic eruptions have scattered valuable minerals from deep within the Earth for millions of years while wind, rainfall, and rivers helped redistribute them to areas around the globe. Glaciers also played a major role throughout the Ice Age by pulverizing rock and blending it into the Earthâ€™s soil. This has been natureâ€™s way of replenishing itself. However, over-farming, erosion, and other factors have resulted in a significant reduction in these valuable essential and beneficial minerals over the past few centuries.

Because of mineral depletion, the important nutrients needed to maintain optimal health are not nearly as available as they once were. A 2004 study published in the Journal of the American College of Nutrition found that between 1950 and 1999, the amounts of calcium, phosphorus, iron, riboflavin (vitamin B2), and vitamin C have decreased considerably in 43 varieties of fruits and vegetables. The study also concluded that this decline could be linked to farming practices which favor large growth over nutrition [1].

Minerals are the building blocks of health and are present in virtually all of the cells in the body to help ensure that our internal systems function effectively and efficiently. Minerals assist the body in building new tissues, balancing pH, releasing energy from food, and regulating a variety of other body processes. If minerals are significantly depleted or no longer available in the soil that is used to grow our food, plants, and ultimately those consuming the plants, will be lacking these minerals as well.

Many growers are quite effective at adding nutrients to their soil. Composting and cover crops play an important role in a healthy soil program. However, growers often times either overlook a critical component of the equation which is proper remineralization, or inadvertently categorize it with adding minerals such as lime that are primarily utilized to balance pH levels in soil.

According to an 1999 study published by the North Carolina Department of Agriculture and Consumer Services [2], sixteen nutrients are considered â€œessentialâ€ to plant development, and six of those are minerals – boron, copper, iron, manganese, molybdenum, and zinc. There are dozens of additional beneficial elements utilized in very small amounts that are nonetheless key contributors to plant and soil health. If the proper minerals do not exist in the soil, plants cannot achieve their full potential. In the case of edibles, this lack of minerals translates to lower nutrient-density.

The good news is that even the most depleted soils can be re-mineralized to become fertile and produce an abundance of healthy, nutrient-dense food. Plants produce vitamins, amino acids, and varying amounts of fatty acids if they are grown in soils containing abundant minerals. Microorganisms, which also play an important role in healthy soil, feed on minerals and organic matter to create humus, humic acid, potassium, phosphorus, nitrogen, and other trace elements. Remineralization helps promote the symbiotic relationship that exists between plants and the microorganisms in the soil.

There are a variety of minerals available to help amend and remineralize your soil. Some of these are also commonly referred to as â€œrock dustsâ€. Unlike traditional fertilizers, many rock dusts cannot be metabolized by plants in their current form. The microorganisms in the soil process the minerals and makes them available to plants in a usable fashion (similar to how worms help turn compost into natural plant fertilizer). The plants take what they need when they need it and the rest remains in the soil until depleted. 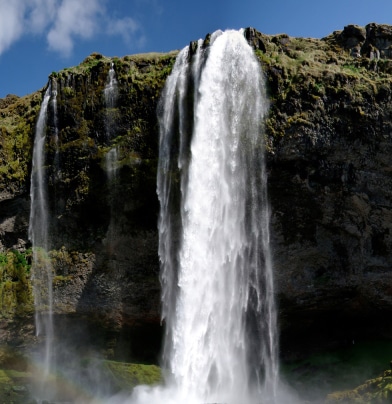 This waterfall cascading over a rock outcropping is one example of how minerals are naturally redistributed into the Earth’s soil. If you don’t have a waterfall nearby, you may want to consider other remineralization techniques.

Minerals can be applied to the soil at any time throughout the year. The most common applications occur during spring planting and bed preparation or fall bed clean-up. A winter application, on the other hand, will utilize the snow melt and rainfall to help naturally work the minerals into the soil for the spring growing season. A summer application will begin providing benefits to your late-season harvest or fall flowers and blooms. Remineralizing the soils of indoor plants is also a good practice as the root systems are much more limited in terms of space, microorganism in the soil, and available nutrients. Yards and turfs can also benefit from minerals by helping improve root development, reducing compaction, and improving drought tolerance to help create a healthier lawn and soil structure. With lawns, an excellent time to apply minerals is immediately after an aeration or just prior to laying new sod. For more established lawns, a simple top-dress works just fine.

If you havenâ€™t already, try digging a little deeper into soil remineralization to see how it can benefit your soil, plants, and life above and below the soilâ€™s surface.